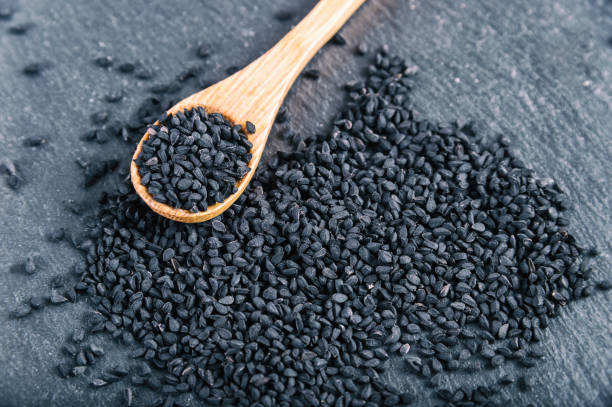 Who would have thought, a spice emerging from Europe, Western Asia, and Northern Africa could possess such enormous benefits. Also known by several other names such as black cumin, Nigella, Nigella sativa by its scientific name, kalonji is a great ingredient for Indian pickles. It finds its place on the shelves of many Indians.

Kalonji plant comes from the buttercup family of flowering plants as its place in the plant kingdom. The plant which grows only about 12 to 13 inches in height produces Kalonji seeds that are very often used as a spice in many parts of the world.

Adding to the culinary uses, Kalonji is also known for its considerable medicinal properties. It has been long known for its use as a remedy for medical issues ranging from bronchitis to diarrhea.

With a crux of what all Kalonji has in it, we shall now take you to a detailed list of benefits that Kalonji oil, Kalonji seeds, and many other forms can bring in for you.

Let us get into the nitty-gritty of kalonji seed benefits:

You probably would have come across the term antioxidants and how work miraculously for our bodies. To renew your memory, let us tell you once again what antioxidants are and how they work.

Primarily, antioxidants are substances that are present in our body to help neutralize the free radicals wandering around for harming the body. The potential oxidative damage to the body is saved by the antioxidants.

There have been numerous researches stating the powerful effect of antioxidants on several diseases and health conditions. Not just this, some researches also suggest that antioxidants can have a robust influence against some terminating and serious illnesses such as cancer, heart diseases, obesity, and diabetes.

Kalonji’s high antioxidant capabilities are attributed to many chemicals present in the plant, including thymoquinone, carvacrol, t-anethole, and 4-terpineol. Even kalonji oil is said to be enacted as an antioxidant in research.

Cholesterol is a low-saturated material that may be detected all over your body. Although some cholesterol is necessary, excessive levels can build up in the bloodstream and raise your risk of cardiovascular disease.

Kalonji has been demonstrated to be very helpful in decreasing cholesterol levels. Supplementing with kalonji was linked to considerable reductions in total and “bad” LDL cholesterol, as well as blood triglycerides, according to a study of 17 trials.

It was also discovered that kalonji seed powder had a larger impact than kalonji oil. Only seed powder, on the other hand, boosted levels of “good” HDL cholesterol.

One of the deadliest and prominent terminating diseases in the entire world today is cancer. Since kalonji is tightly packed with antioxidants, they help neutralize the free radicals that might contribute to the development of cancer. Kalonji and one of its active compounds, Thymoquinone is said to have great cancer-fighting properties.

Research has proven that it is associated with the cell death of cancer cells in the body. This is not it, kalonji has been found to be effective against breast cancer cells. Several kinds of cancers can be prevented by the use of kalonji.

With kalonji by your side, you do not need to worry about the harmful bacteria as much. An unending list of infections and diseases is an outcome of bacteria manifestation around you.

To cut off these bacterias, you might as well need the kalonji seeds. Kalonji is subjected to have anti-bacterial properties. And can fight off certain strains of dreadful bacteria.

In many cases, inflammation comes as a normal immune response from the body if it detects any antigen in the body. But, when inflammation in any part of the body, outer or inner, increases to chronic levels, it can be a serious threat.

Chronic inflammation can be a sign of dreadful diseases such as cancer, heart diseases, and diabetes. Kalonji comes to your rescue here. It has anti-inflammatory properties which prevent chronic inflammation of body parts thereby preventing serious complications in the future.

Kalonji has been found to be of great significance for those with rheumatoid arthritis.

Kalonji seeds have a wide range of culinary and therapeutic use.

Kalonji has been linked to a wide range of health benefits. It was traditionally used to cure a number of diseases.

Although additional study is needed, incorporating kalonji into your diet or taking it as a supplement may help with a variety of health issues.