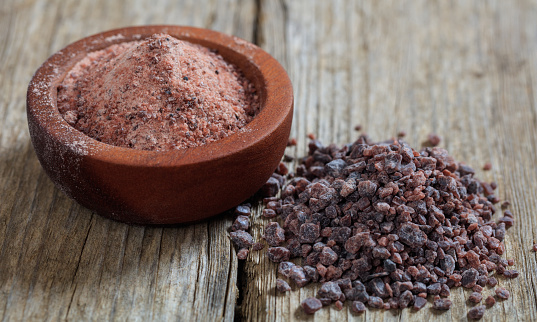 If you’re an Indian, you must have heard of the term black salt and probably would have tasted it as well. As the name suggests black salt is black in color in its raw form. It is popularly used in various Indian recipes as an ingredient. It does not taste like the regular white salt but has a unique taste to it.

There are claims from several types of research that black salt also holds some of the health benefits that white salt might not have. So, here we are to talk about the black salt benefits and a lot of different stuff about it.

What is black salt and where does it come from?

Though there can be many origins of the black slat, the black Himalayan salt is the most popular of all. Black salt is essentially a rock salt that is found in parts of Bangladesh, India, Pakistan, Nepal, and other locations of the Himalayas.

Black salt uses are documented and date back to the times of Ayurvedic medicine in India.

Coming to an intriguing fact about this salt, despite the name, it appears pinkish-brown in color in its edible form.

Interestingly, black salt is not just limited to just one type. There are types of black and we are going to discuss those with their uses here.

Indian black salt, or Kala namak, is another name for Himalayan black salt. Despite the fact that it has been recognized for its medical benefits, there are few pieces of research to back up these claims.

It’s often utilized in cooking, especially in Asian and Indian cuisine, because of its pungent, savory, and umami flavor. It’s also employed in vegan cuisine to produce an egg-like flavor because of its faint, sulfurous fragrance, which is comparable to eggs.

The black lava salt got its name as Hawaiian salt as it comes from Hawaii. Black lava salt is true to its name and is truly black in color, unlike the Himalayan black salt which is pinkish-brown in appearance. This one is mostly used to sprinkle over the cooked food as a finishing garnish over the food.

The taste is rather distinctively earthy. Dishes that are designated to hold a little smoky flavor are best garnished and accentuated by the salt because of the black lava salt’s mild smoky and earthy flavor.

A combination of ashes, sea salt, charcoal, and occasionally black pigment is used to make black ceremonial salt, also known as witches salt. It is not intended for human consumption.

Despite the absence of scientific evidence, some individuals think that black ritual salt has magical properties that can protect them from malevolent spirits. It can be strewn throughout the yard or kept in a jar beneath the bed by believers.

Though this superstitious behavior is probably safe, it’s not recommended, and there’s no proof to back it up.

Fundamentally, black truffle salt is a new concoction of black salt, black sea salt, and truffles. Being tightly sealed in a container, the aroma of truffle permeates through the salt and imparts an earthy truffle aroma and taste to the salt.

Real truffle salt has real pieces of truffle and thus tastes earthy and truffle-like with no hint of chemicals. Like the truffle oils, the truffle salt is also used as a garnish on the food in the kitchen.

Let us now talk about the health benefits of black salt over the regular white or table salt that you regularly use in your daily routine. For a kick start, here is the first fact- black salt has a lesser amount of sodium than the regular table salt.

Let us dive right into other benefits of black salt:

Black salt processing is not exposed to a lot of harmful additives. The table salt that we use regularly is put through a lot more additives and processing substances than the black salt.

Hence, the originality and rawness of the black salt is not lost which makes it a healthier option to consume. Anti caking agents that are added to the regular salt are also avoided in the black salt production.

Coming from Himalayas, the Himalayan black salt has a greater amount of minerals than the regular table salt.

Black salt is often associated with the laxative effects on digestion and is known to improve digestion.

Black salt is an excellent natural substitute for table salt, especially if you’re trying an Indian or Asian cuisine that asks for it. Its distinct taste profile may be used to improve the flavour of a variety of foods.

However, you are unlikely to experience any of the magical healing advantages that you may have read about on the internet. There have been no studies comparing the health consequences of black salt against conventional table salt.

More research is required in general. For the time being, savour this salt’s distinct flavour profile and delectable flavour.

1 thought on “Black Salt Or White Salt: Which One Is Your Health Partner?”