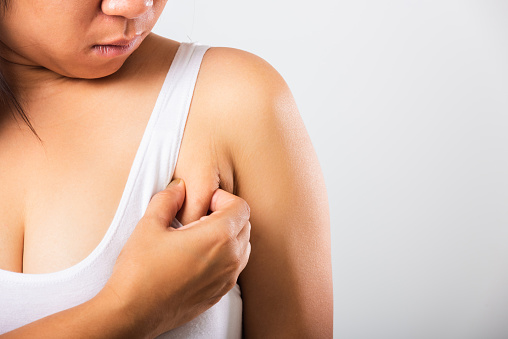 Armpit fat is a commonly occurring issue in various adults. Usually associated with excess fat due to heavyweight, it can also be caused because of genetic and hormonal reasons. At times, armpit fat is also referred to as axillary breast as it forms a sort of projection at the sides of the breasts of women.

The armpit fat usually appears as a tiny pouch near the armpits not very fascinating to look at. It does not necessarily grow among women with excessive weight, it can also be seen among average-weighted women. The tenacious pockets of underarm fat, like fat rolls or “saddle bag” fat on the exterior thighs, persist despite strict dietary and workout routines.

Many women complain of armpit fat bulges because it does not appear good to some people and might as well cause body image issues among several women. They try to cover up this fat using several clothing items yet it does not help and at times, gets very uncomfortable to carry on.

Women tend to give up on many clothing items like swimsuits, tank tops, or sleeveless tops and dresses. This also tends to incorporate a sense of underconfidence among women. Wearing tightly fitted clothing pieces becomes a nightmare for them.

Thus, we have raised this very common issue here to mention some of the armpit fat exercises do that you know how to get rid of armpit fat easily. Read on to get to the amazing alternatives and remedies that can cut off the armpit fat and make you more confident with it being gone.

Before diving into the treatment of the problem, let us first understand the emergence of the problem and its causes. Armpit fat may affect both men and women. It appears that it affects more women than males.

Too-tight tops or bras can cause the flesh between the breasts and armpits to protrude.

However, armpit fat can be caused by a variety of factors other than clothing choices.

The following are a few of the most prevalent reasons:

Body fat and obesity have a lot to do with your heredity and genes. Similarly, if you’re carrying an axillary breast, it could be because of hereditary factors as your parents’ genes might have a say in that. Studies over several years have asserted that our genetics often determine where our bodies store fat.

Albeit armpit fat is not gender discriminant, some studies do assert that women are more likely to have an impact of genetic factors than men. Basically, having blood relatives and other relatives who have armpit fat might put you in a position of getting the same condition.

Having an excessive weight also becomes a cause for the armpit fat to grow inevitably. However, it does not account for the guarantee that people with a lean weight cannot be subjected to such a projection. Subcutaneous fat can accumulate in the underarm region if you are overweight. Weight gain can also increase the size of your breasts and armpits.

Breast tissues are very often subjected to changes due to hormonal alterations in the body. Hormonal changes in your body could be one of the reasons why you have armpit fat. Especially the hormones in women like estrogen, progesterone, etc. make them more vulnerable to this condition.

Alteration in these secondary hormones in women can lead to swelling of breasts. Mostly, during pregnancy, women are subjected to a huge amount of hormone alteration like prolactin, other hormones, which lead to enlargement of the breasts.

Enough of running acter the cause, now is the time we understand the things you need to do to get rid of the troublesome armpit fat. Here are a few suggestions:

Losing weight with some target armpit fat exercises can have the fat removed off the place. Once the fat in your body is rightly distributed all over the body, you can work on the target area with specified exercises.

For women, their undergarments, especially bras can lead to a lot of trouble if the right size is not worn. Armpit fat development can be one of those. Thus, it is important that you pay heed to the undergarments you’re wearing for their right size and style according to your body type.

Armpit fat can be resistant to exercise, including particularly designed resistance or weight training for that reason. Increasing your chest muscle mass and strengthening your upper arms might assist to tighten the region and reduce the appearance of armpit fat. Muscle growth also burns calories, which aids weight loss.

If you’re okay with it and are very sure, you can even get the armpit fat removed surgically. Make sure you consult a good doctor for the same.

Leg Press: Everything About This Exercise