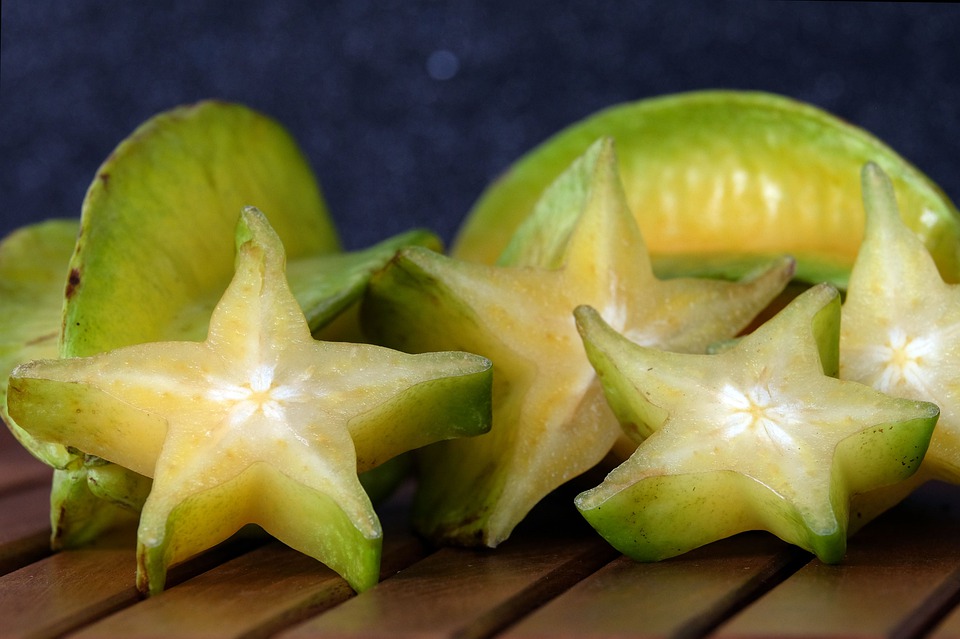 You must have come across the very alluring star fruit somewhere or other. People often wonder what start fruit tastes like. Chuck away the regular season fruits. It’s time to try something new and different. Star fruit is going to quench your thirst if you long for some uniqueness in your choice of fruits.

There are plenty of fruits and vegetables to add variety and colors to your diet. Star fruit is one among them. It is gaining much more popularity than before these days. Everyone is becoming aware of the unusual fruit and asking questions. We are here to answer many of those questions.

Apart from an intriguing appearance, star fruit is often associated with several health benefits. We are going to discuss that one by one here.

What is a Star fruit?

The name star fruit is the common name given to the fruit named Carambola due to its resemblance with a star when cut. The origin of the star fruit is believed to be coming from either Sri Lanka or The Moluccas, the islands of Indonesia. But as of now, the fruit is being teleported and cultivated throughout Asia for about centuries now.  Southern China, India, and the Philippines are all now cultivators of the star fruit.

As for the edible eligibility, the skin is edible and the flesh has a mild, sour flavor which makes it to the kitchen shelf for inclusion in several popular dishes.

The fruit is yellow or sometimes, green in color. It has majorly two types vaguely defined: the smaller one which is potentially sour and a larger one which essentially adds to the sweet tooth.

Hope your query about how to eat star fruit was cleared. Let us now move on to an important aspect of the discussion- the nutritional value of the fruit.

However appealing the fruit might turn out to be, it holds a significant amount of nutritional goodness that you might want to know in detail.

Albeit the nutritional content may eme to be relatively low, it does make for a good source of Vitamin C for your daily requirement. Also, do not ignore the fact that this single serving gives you only 28 calories and 6 grams of carbs which I great for someone who is on a strict diet or wishes to maintain that good body weight.

A little more on how to eat star fruit:

Initially, it may seen like chomping on a wild plant. But, remember, trying new is the key! Do not stop yourself from diving into something great like this.

Here’s how you should be eating the fruit:

Not to forget, it can be added to the diet in plenty of ways. Add to salad, desk dishes, stews, and curries, cook with seafood, to shellfish dishes, formulate a jam or chutney out of it, juice it, and put it in whichever way you like.

As mentioned earlier, this fruit is attributed to having a few health benefits. Let us see what those are:

The very first benefit is a great head start to the list of benefits. The star fruit is known to have fibers of anticancer properties. Research has shown that star fruit can potentially act as a preventive measure of the deadliest disease- cancer. The toxicity is culminated because of the fiber of the star fruit.

Star fruit is filled with antioxidants which give it the power of anti-inflammatory properties. The symptoms of psoriasis and dermatitis can be helped with this fruit to some extent.

What’s better than such a delicious weight loss agent? The high fiber star fruit helps boost the metabolism of your body. Also, as mentioned earlier, the fruit has minimal calories and a great amount of vitamin C which essentially helps in weight loss.

What’s more in a star fruit- it has the properties of immunity-boosting substances. Since it is loaded with Vitamin C, you know it is a great option to chuck away the casual diseases. White blood cells production is pumped which eventually results in great immunity.

Because of the anti-inflammatory properties, it eases out the soreness in your throat by cutting down try phlegm and mucus. It is a choice of many people during cold and cough or even influenza.

Star fruit jeeps your heart happy and healthy. Sodium and potassium in decent amounts help a great deal in enhancing the health of your heart.

Not ignoring the fact that star fruit also poses some potential threat to a certain population.

People with kidney diseases best not have the star fruit as it might hinder their recovery and harm them. Also, an extremely important point to note here is that the star fruit is also a carrier of neurotoxin that can harm your brain and lead to neurological disorders. People with healthy kidneys can release these toxins easily. But, for kidney patients, it gets accumulated and harms their body and head.