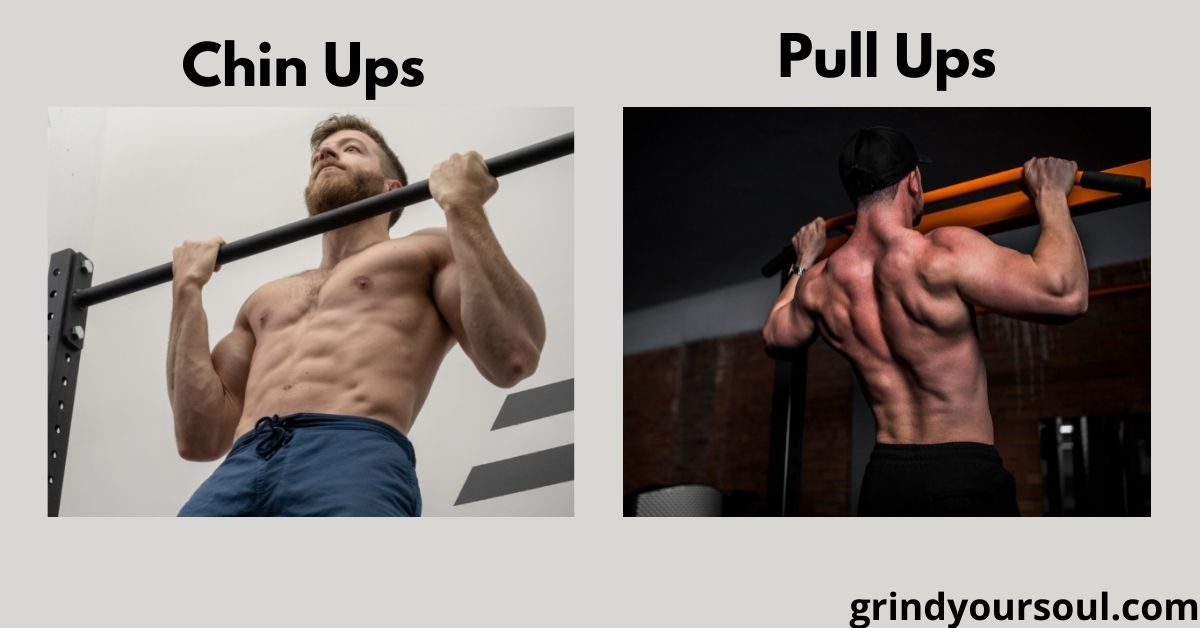 It has been a long-run debate in the fitness industry- which one is better pull-up or chin-up? Well, here we are to site the major difference between pullups and chin-ups and provide you with an extensive collection of exercises that can save the day for you. Chin ups Vs Pull ups both being exercises of the upper body and being somewhat similar in their approach might confuse a large populace. Both exercises target several muscles for the upper body but are essentially different in their movements and specific target areas. Hence, let us get into the nitty-gritty of the difference between pull ups and chin ups.

The fundamental difference arises sat the placement of hands in both the exercises. In a pull-up, your hand faces outwards and away from you. While in a chin-up position, your hands face yourself with the help of an underhand grip. Before we get into the discussion of chin ups vs pull ups, let’s see what other differences these two have by studying them one by one.

It is a general bodyweight exercise that strengthens the muscles of the upper body. Pullups only require a pullup bar and nothing more or something’s that’s thinly placed horizontally above your height which you can grip firmly would do the job. Here, read on the way a pull-up is done:

How to do a pull-up:

Muscles labored during a pullup:

This gives your upper body muscles enormous strength. You can try doing more reps each day for better results.

Now let us take look at the prerequisites of the chin-up exercises.

Chin ups are another way of bolstering your upper body muscles. More like pullups, this exercise maintains quite a difference from pullups simultaneously. Here, the main difference lies in the grip variation of the bar. Chin-ups are essentially done with a stipulated grip that is, the palms face you in this one.

How to perform chin-ups:

Muscles strengthen due to chin-ups:

Generally, chin-ups are best for growing the muscle for your back, strengthening your biceps, and stabilizing the core and shoulders.

Difference in difficulty and effectiveness:

While the debate around pullups vs chin-ups tends to continue, let us take into consideration the differences in these both exercises have in their effectiveness and ease of doing.

Both being extensive upper body exercises, chin ups vs pull ups are both effective in their ways.

While talking about their way of doing or difficulty levels, typically, chin-ups are considered to be easier than pull-ups given the simulated grip. This accounts for more exercise with a little less effort and time.  Pullups essentially focus on the latissimus does while chin-ups take up the help of the biceps more. Thus, chin-ups seem to be a bit easier.

The discussion around chin ups vs pull ups is not likely to end anytime soon. Some fall for the simpler movements of chin-ups while some fall for the wider range of effectiveness and muscle engagement of pullups. We have tried to explain the key difference between both pull-ups and chin-ups. Also, the text above notifies in brief which exercise is a little easier. However, we infer that it totally depends and varies from person to person. But we have provided generalized information based on the researches done in the field.